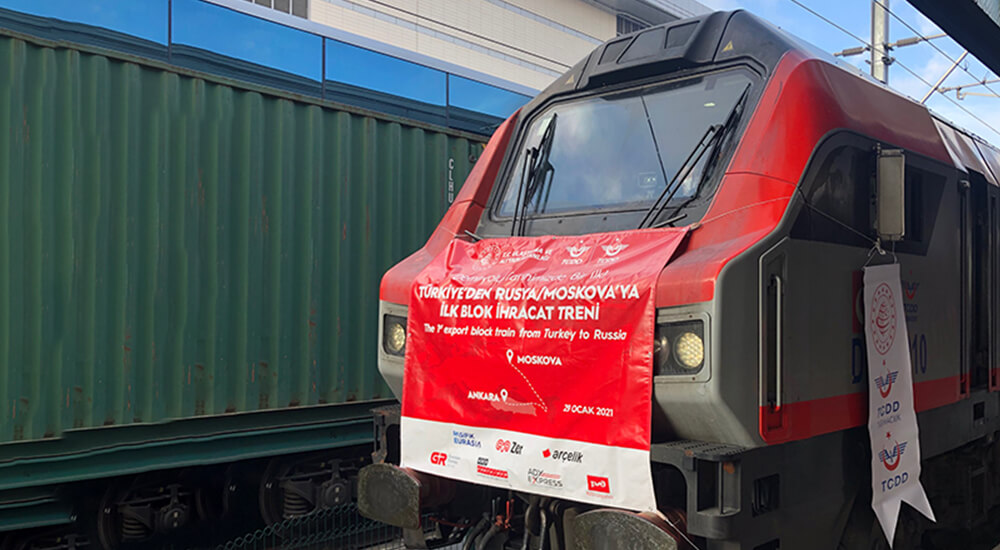 The “first block export train from Turkey to Russia” carrying Arçelik's products, which we have realized as the organizer authority in international railway transportation, was sent off from Ankara on 29 January 2021 with a farewell ceremony.

With its 15 wagons, the train will travel approximately 4,650 kilometers in 8 days passing through Georgia and Azerbaijan to reach Vorsino (Moscow), its final destination in the Russian Federation, and will deliver 3 thousand 321 white appliances produced in Turkey by Arçelik, contained in 15 containers, to Russia.
This transportation activity, which will be carried out with door-to-door delivery model via road and rail combined transportation modes, will significantly contribute to the logistics costs and time savings of exporters.

Adil Karaismailoğlu, Minister of Transport and Infrastructure, in his speech said; “Our export train, which we will see off today, will travel approximately 4,650 kilometers to Moscow, its final destination in the Russian Federation, by using the Baku-Tbilisi-Kars railway line. 3,321 dishwashers, stoves and ovens produced in our country will be transported to the Vladimir Region of the Russian Federation in 15 containers loaded in 15 wagons. The fact that this shipment, which was previously carried out by sea and land, is being carried out by rail is the result of the breakthroughs realized in the field of railways in Turkey and the confidence felt in our railways management”.

Karaismailoğlu, furthermore, stated that this shipment, which will be carried out with using road and rail combined transportation modes and door-to-door delivery model, would be an extremely important alternative for exporters, and expressed that; “The transportation of containers and truck haulage beds by rail will reduce the transportation costs of our exporters and will strengthen their competitiveness.”

As Zer, we are proud to realize the first transportation activity of this crucial route that adds value to our country's exports as well as sustainable logistics.

When you visit a web site, it may receive or store information from your browser, usually in the form of cookies. This information may be about you, your preferences, or your device, or it may be used to make the site function as you expect it to. The information often does not directly identify you but may provide you with a more personalized web experience. You may choose not to allow certain types of cookies. Click on the different category titles to learn more and change our default settings. However, when you block certain types of cookies, your site experience, and the services we might offer may be affected. You may find the Cookie Privacy Notice here.

These cookies are necessary for the website to function and cannot be turned off in our systems. They are usually set up to handle your actions only. These processes include your service requests, such as setting your privacy preferences, logging in or filling out forms. You may set your browser to block or warn you about these cookies, but in this case, some parts of the site may not function.

These cookies are stored to increase the functionality of our website and to provide ease of use. For example, sharing to third-party social media channels through our website allows us to offer opportunities such as remembering search history on the next visit of our website visitor. These may be set by us or by third-party providers whose services we use on our pages. If you do not allow these cookies, all or some of these functions may not work properly.

These cookies allow us to count site visits and traffic sources in order for us to measure and improve our site's performance. They help us learn which pages are visited the most and least, and how visitors navigate the site. All information these cookies collect are compiled and therefore anonymous. If you do not allow these cookies, we could not know when you visited our site.

These cookies are set on our site by our advertising partners. They may be used by relevant companies to build your interests profile and show relevant ads on other sites. They work by uniquely identifying your browser and device. If you do not allow these cookies, we could not be able to offer you a specialized ad experience on different sites.

Your Preferences Are Important To Us!

Within the scope of Cookie Privacy Notice, you may give your consent by clicking “Allow All” button if you accept the transfer of your visits, click and browsing data that shows your behavior on the platform, your personal information such as your IP address to LinkedIn Corporation, Google Inc., Meta Inc. and Hotjar Inc. which are the cookie service providers residing abroad for the purpose of processing your data through targeting, advertising and social media cookies. You may always change your preferences regarding your personal data, which may be processed within the scope of the use of cookies and other identification and tracking technologies other than mandatory cookies, and which may be transferred abroad through providers, from the "Preferences" tab.